With medals in sight as competition intensified on the first day of knockout action in the Commonwealth Games Squash Doubles in Gold Coast, Australia, it was athletes from India and Malaysia who upset the form book at Oxenford Studios.

Indian pair Dipika Pallikal Karthik & Saurav Ghosal experienced the full range of emotions across two matches in the Mixed Doubles. In the morning, the fifth seeds struggled against Malaysians Aifa Azman & Sanjay Singh Chal, recovering from dropping the first game to come back and beat the 11th seeds 7-11, 11-6, 11-8 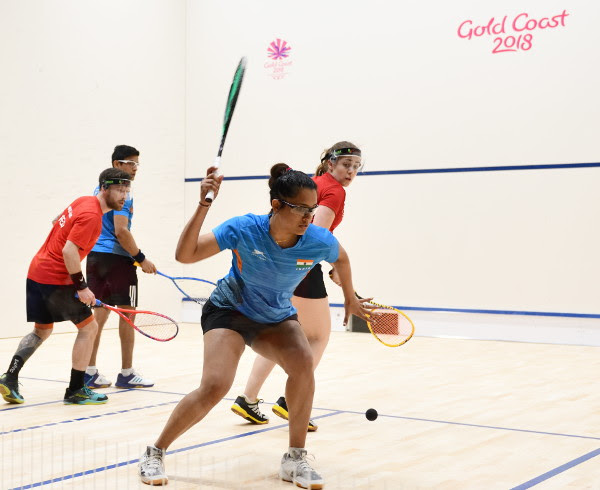 In the evening quarter-finals, the pair then pulled off a notable upset over Tesni Evans & Peter Creed of Wales (pictured above), fighting from behind in the second to clinch a tie-break and beat the third seeds 11-8, 11-10 in 38 minutes.

“When you play two matches a day, it’s really hard to regroup and come back stronger in the second because you’re so used to just playing one match a day,” said Pallikal. “When you mess up one match in the Commonwealth Games you’re out for four years, rather than when you play PSA you can come back the next year and play it again.

“I think we enjoyed it a little more this evening than we did this morning – and that’s when we play our best squash. We loosened up a little bit in the evening – and we’re just glad to have taken that second game as they were coming out really strong and if it had gone to a third it could have gone either way.”

Ghosal continued: “Very rarely do you have an entire event when you play the way you want to the whole time. You’ll have a day when you’re not feeling the ball well, or your body’s not moving well. I think the morning match was something like that.

“But credit to the Malaysians, they played really, really well. We had to get through that match and sometimes when you get through matches like that, it gets you better.

“But there’s more that we can do. We won a good match against a very good team this evening.”

But now the pressure’s off? “I agree there’s no pressure on us now,” said Pallikal. “But both of us know that the Commonwealth Games is really important and we want to do well. I think Saurav and I are good enough to beat anyone on our day.”

The pair are playing the Commonwealth Games for the first time together since Ghosal married his partner’s sister. “I’ve known Dipika since she was about nine or ten and we’ve always been close – and I dated her sister for a very long time, since I was 16, so we’ve known each for a long time.

“I don’t think the ‘intimacy’ has changed a lot, but of course she’s family now, and I’ve always cared for her.”

Pallikal and Ghosal will now face top-seeded New Zealanders Joelle King & Paul Coll for a place in the final. The other Mixed semi will be the Anglo/Australian affair predicted by the seedings – featuring the second seeds Alison Waters & Daryl Selby, of England, and fourth-seeded Aussies Donna Urquhart & Cameron Pilley (pictured above in morning action against Cayman Islands).

Incredibly, both pairs survived tense and emotional domestic derbies – in which each pair’s opponents included their own partner in the other doubles event!

But it was on one of the sidecourts that Waters and Selby squandered a one-game lead to let their opponents Jenny Duncalf & Adrian Waller, the No.7 seeds, draw level – then lead the decider 10-8. 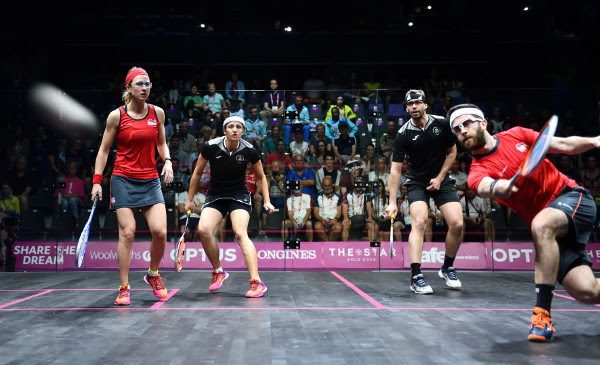 “We’ve obviously trained a lot together and every time we play in practice it’s really close,” explained an emotionally-drained Selby (pictured above during the morning match against Malta). “They’re a really good pair and have both improved a hell of a lot. We knew it was going to be tough.

“I think we played the first game well and half of the second game really well – but I think we just saw the finishing line and both us were guilty of hitting a few errors and making a few mistakes and letting them back in. And they capitalised extremely well!

“Alison dug in and did what she does best. I’m proud of her. We came through from 10-8 down!

“But it was very emotional. I felt joy and sadness in equal amounts – genuinely! We’re all so close: Adrian’s my doubles partner and Jenny and Alison play together. It was really horrible to play in that match.

“It’s emotionally draining to play against friends – especially when it’s that close. When it’s 10-all in the third, it’s just one point – one mistake, one error, one no let, one something …. and you’re gone! Or you’re still in a competition that only happens every four years! That’s why I, Jenny and Alison are quite emotional about it as we know it’s our last chance.”

Looking forward to the semi, Selby said: “They’re going to have the home crowd behind them. But we’re a dangerous pair. It’s going to be an enjoyable experience. We came here for a medal and we’ve got two cracks at medals. We’ve just got to take one match at a time and try and enjoy the atmosphere.” “We didn’t underestimate our opponents and did what we had to do,” said Clyne. “We’ve been battling away on these side courts without much attention – which suits us. But it will be good now to get onto the showcourt tomorrow.”

Lobban added: “Our partnership started at the World Doubles in 2016 – which we won. We worked well together and enjoyed playing together – so it was probably back then that we started planning our bid to be here to fight for medals at the Commonwealth Games.”